The only real change comes from the grace of God (video excerpt). 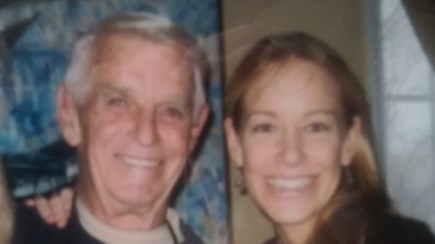 I forgot today was Father’s Day until I went in to church this morning. And, I forgot I made this video too (among others), in honor of God’s amazing work in my life, until I was making lunch and thinking about my dad and God, and the gratitude for the healing work the word of the Lord brought to my life-long hurts, and severed relationship I had with my dad, and how the Lord healed all, miraculously through His grace, one afternoon after a prayer by a prayer partner in Life Church (England church which helped to change my life).

In honor of my Father in Heaven and my dad, in heaven. I am so grateful for the marvelous relationships I have with you, and was able to have, even if only, truly, for a short time.

Our last Christmas together. A good reunion, 2009.

My devastating reality of speaking the truth came into being. When I spoke my truth to my dad my biggest fear was realized, that he would no longer have a relationship with me, and that was the case – “I think it better we no longer speak,” was all I got to in response to an email I sent him, after the bit about me having “Crossed a line.”

Well, that got me requesting prayer at church one afternoon soon where someone prayed over me and for my dad Malachi 4:6.

What followed was indeed miraculous, and grace showered upon me like it was being poured out from heaven upon my head – days later – out of no where. Bizarre, and beautiful.

Love and compassion flooded in me washing my “bad” thoughts about my dad away, and leaving nothing but good. God worked his miracle working power in this circumstance of my heart, and, I found out later, my dad’s.

God is such a marvelous Father – loving us so much. Even know I was the one with the bitterness in me toward my dad for his lack of x,y,z that he failed to do, I wasn’t the one who was consoled. God gave me His grace to love my dad! I LOVE THAT! Heart emoji.

Listen and learn of the grace of God, healing me and my dad forever more. He’s so good!

Malachai 4:6 And the Lord will turn the hearts of the father’s to their children and the hearts of the children to their fathers. Had this prayed over me for me and my pop for a harmed relationship we had, and within a week I had grace pour over me randomly, washing out my hurt and pouring in the love and compassion of the Father for my dad. We would have a new relationship from that point forward.

Here are some excerpts from the audio file, below.

I told him in an email. I wrote it with the intention of hopefully coming clean with everything with respect to how I felt about him and that type of treatment, everything hoping he’d acknowledge me, that my feelings matter – I even used my siblings hurt too about some of his behavior toward them with respect to this, which maybe I shouldn’t have – it crossed a line. I just told him all of the hurts. I was done pretending, and my build-up, boiled over.

I was honest. I was a little mean too, I guess. It included my fears and hurts about some ways he’d treated me over the years and how I was not interested in that relationship anymore. I wanted and deserved more and better from him. For us.

We had this relationship much of my life where he would do what he would do and I would just accept it whether I liked it or not because mostly I wanted him to love me, and I did not want to rock the boat so I wouldn’t tell him how certain behaviors affected me. I would just blow it off – accepting it as him.

My hope, that he would treat what I was saying with some kind of respect and honor what little I was asking. I was hoping for a somewhat favorable response. Not. He answered, “I think it best that we no longer communicate with one each other. You’ve crossed a line.”

Anyway, though I felt resolved and good for me for taking myself and my feelings into consideration finally, more than his for once, I still wanted my dad. I’d always wanted my dad. That never goes away. I believe even if we are right or justified with our actions, the case remains that we wish for our parents to love us and to be the mature, guiding family they are intended to be, and to do what is right, always – for everyone, but they don’t always.

I believe that if we are without a good relationship with our parents, it hurts us. We are made to love and to be loved, you’d think especially by those who brought us into this world.

I felt strong and right for having stuck up for myself. It was the first time in my life with my dad like that. I left it at that. I was glad I didn’t feel diminished. Though I was sadly devastated, I was glad not to have caved, and wrote something back weak and self-denying, like, “Oh forgive me, I am so sorry, I don’t mean it. Please forgive me. Come back.” Essentially begging him not to leave me all the while not acknowledging the truth of who I was and how I have felt hurt by how he had treated me in certain situations. I was tired of the denial and deceit of what not standing up for me represented – a façade, as saying to myself that I don’t matter. I wasn’t willing to tolerate behavior that was deceitful nor was I willing to let myself down anymore essentially accepting that I did not matter. If I don’t matter, then let’s be true with it. I was done with all of that though. I could at least stand tall even know I was a sad on some level too.